Pumpkins are best known for hollowing out and decorating them for Halloween. There are also championships and competitions to grow the heaviest pumpkins. The heaviest giant pumpkin comes from Belgium with a weight of 1190kg. The record in the Netherlands is almost 670kg.

Pumpkins are of course also very tasty to eat, think of pumpkin soup and pumpkin pie.

Most gourds are inedible and are used for decoration. 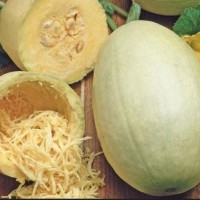 Looking for pumpkin seeds to sow in your vegetable garden? At Tuinzaden.eu you have come to the right place, we have a large assortment with more than 40 different pumpkin varieties from different seed breeders. Take a quick look in our webshop and buy your pumpkin seeds today!

Grow your own pumpkin?

Pumpkins are a lot of fun to grow. Some varieties can grow very large and heavy, other pumpkins are more suitable for hollowing out for Halloween. Many pumpkins are also very tasty to eat, such as pumpkin soup, pumpkin pie and stews.

Pumpkins come in many shapes, colors and sizes. The most popular pumpkin varieties are:

Did you know that pumpkins can also be grown directly on compost piles. Ideal conditions due to the nutritious soil.

How do I sow pumpkin seeds? How to grow pumpkin?

It is best to pre-sow pumpkin seeds indoors from April. Pumpkin seedlings are somewhat more difficult to transplant due to the root system, so sow each seed in a separate container. Press the pumpkin seeds on their sides about 1-2 cm deep into the sowing soil. Sowing the flat oval seeds on their sides makes them much easier to germinate and less likely to rot. Then place the pots in a warm, light spot and keep the soil slightly moist. It is even easier to place the pots in a greenhouse, as the germination temperature of pumpkin seeds is 20-22 ° C.

Once the seeds have germinated, you can store the seedlings in a cooler place. Start hardening off the pumpkin plants in May by placing them outside in a sunny, sheltered place for 2 weeks during the day. As soon as the chance of night frost has passed, you can plant the plants in the garden. Pumpkins are plants that need a lot of space, they form long tendrils with large leaves. Therefore, maintain a mutual planting distance of at least 100 x100 cm and guide the tendrils alternately to the left and right.

Especially on hot days, give plenty of water directly on the ground and not on the plants. This will prevent the pumpkins from rotting. For a higher production and large pumpkins, it is wise to fertilize extra every 2 weeks.

After 3 to 4 months, around August-September, you can harvest the first pumpkins. Pumpkins are ripe when the stems start to dry out and show small wrinkles / cracks. The pumpkin has stopped growing for some time and will also have become slightly dull with a more intense color. In any case, harvest pumpkins before the first frost and before rainy periods. Leave about 5 to 8 cm of stems on the pumpkin when harvesting.

Below you will find a list of the most frequently asked questions with answers about sowing and growing pumpkin seeds yourself. Before sowing your seeds, always read the enclosed sowing instructions on the packaging for your specific pumpkin variety.

When to sow pumpkin seeds?

Pumpkin seeds can be pre-sown indoors in pots from April to May. Press the pumpkin seeds on their side about 1-2 cm deep into the sowing soil.

If you want to sow the pumpkin seeds directly outside in the ground, do not start sowing in the ground until the beginning of June. Sow 2-3 seeds per hole and thin out the seedlings later by leaving only the strongest seedling standing.

When do pumpkin seeds germinate?

Pumpkin seeds germinate after about 1-2 weeks, depending on the temperature.

What is the best germination temperature for pumpkin seeds?

Pumpkin seeds germinate at a soil temperature of 20-22 ° C.

How deep should I sow pumpkin seeds?

When can I transplant the pumpkin seedlings?

Pumpkin seedlings are somewhat more difficult to transplant due to the root system, so sow each seed in a separate container. If you are sowing the seeds outdoors in the ground, sow 2-3 seeds per hole and thin out later by leaving the strongest seedling standing.

How can I harden off pumpkin plants?

Start hardening off the pumpkin plants in May by keeping them outside in a sunny sheltered spot for 2 weeks during the day.

What is the planting distance for pumpkin plants?

Pumpkins are plants that need a lot of space, keep a distance of at least 100x100 cm from each other. Pumpkin plants form long tendrils with large leaves, lead these tendrils alternately left and right for a better spread.

What is the best location for pumpkin plants?

Pumpkin plants like a warm, sunny and sheltered place. On hot days, water enough directly on the ground otherwise parts of the pumpkin may rot.

How do I take care of pumpkin plants?

Place pumpkin plants in a warm, sunny but sheltered spot. Water regularly and do not let the soil dry out. For higher production and large pumpkins, it is best to fertilize every 2 weeks.

What is the best soil and / or soil type for pumpkin plants?

Use nutritious, humus-rich, well-draining potting soil. As soon as the pumpkins appear, fertilize every 2 weeks.

When can I harvest the pumpkins?

After 3 to 4 months, around August-September, you can harvest the first pumpkins. Pumpkins are ripe when the stems start to dry out and show small wrinkles / cracks. The pumpkin has stopped growing for some time and will also have become slightly dull with a more intense color.

Harvest pumpkins before the first frost and before rainy periods. Leave about 5 to 8 cm of the stems on the pumpkin when harvesting and keep them in a dry and frost-free place.

How big does a pumpkin get? Which types of pumpkin are the biggest?

How many pumpkins grow on a plant?

On average 2 to 4 pumpkins grow on a plant. It is best to leave the 2 largest ones.

The largest and heaviest pumpkin in the world weighed 1190kg and was grown in Belgium in 2016 by Mathias Willemijns. This pumpkin descended from the Atlantic Giant type.

Which pumpkin is best for Halloween?

To make a halloween pumpkin it is best to use a medium sized pumpkin. An excellent strain for this is the Jack O'lantern pumpkin.